French heavy metallers Hammer King have debuted with a smashingly good time in Kingdom Of The Hammer King which in all actuality references the term “hammer king” once every eighty-four seconds. I spoke with the mastermind Titus Fox as he clued me into the thirty-five year creation of this project, as well as the to the mighty power of the Hammer King and his messenger, The Chancellor Of Glory. He also discussed his thoughts on HammerFall as well as his influences and a possible US run. If you show them your hammers, they’ll show you theirs! 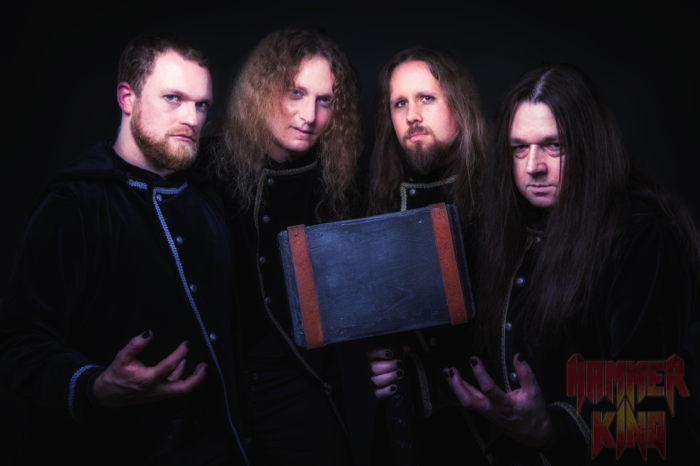 Let’s start with some background about the band. How long did you work on these compositions before you decided to form a band apart from the vocal work that you were doing for Ross The Boss?

Titan Fox: Well, the songs were written by the Hammer King, who is not only good with His hammer, but is also a tremendous songwriter. All was written in a very short time as the songs just seemed to fall into place. We played them in the rehearsal room at Castle Rockfort in Saint-Tropez, then shortly made demos and had an album within a matter of months. As Ross The Boss (the band) has not worked together since December ‘11, I had been wanting to release a strong and straight metal album for a long time. The King gave me the chance to do that – and I am very happy about that. The Hammer King has selected the best musicians for His band as well. Dolph Aidan Macallan is a tight and creative drummer, but also a good arranger of music. K.K. Basement is a straight bass player, who gave us a mighty groove, but he is also a gifted singer and will be able to perform amazing vocal harmonies live. And as for Gino Wilde, well… he’s Gino Wilde! We are a great team on the axes, but he is the most timeless lead guitarist in this and all possible other worlds. He is the real star of the band!

As for the legendary Ross “The Boss” what were his impressions of the material in the beginning, and what does he think of the finished album?

Titan Fox: I don’t think he has heard the entire album yet. I sent him some songs in advance and he liked them, so that’s why he recommended us to help us ink a deal. But he is having his run with his bands at the moment and we are serving the King now. Nevertheless, all is great and we are on good terms.

Titan Fox: The King is a selfish ruler and I am not allowed to have the slightest problem with it. The King writes about Himself, about his lives and crimes, about His battles and about his Reich. You know, it really takes some balls to have that many “Hammer Kings” on one album! In a review we got, some guy put us down for the many “Hammer Kings” and said that we sing “Hammer King” thirty-five times in forty-nine minutes, or once every eighty-four seconds. We might feel tempted to increase that rate on the next album!

Another thing I’ve noticed is that there’s a lot of HammerFall influence here in so far as the music as well as the band’s name, which seems to reference the Swedish legends.

Titan Fox: I think that Hammer King and HammerFall have been influenced by the same original Metal bands. I do respect HammerFall’s work and dedication, but I have not followed them since 2000, I guess. But you see, there is only one way to play great straight metal!

Tell me a little about yourself. How long have you been playing in bands and what made you want to be a musician? What was that one “magic moment” where you knew that this was something you wanted to do for the rest of your life?

Titan Fox: I can’t remember a magic moment. I have always been very passionate about music. I was one of those children who listened to real music while the others were singing ditties. I can’t tell where it comes from; it’s just in my blood. I have played the guitar for ages and I have always sung. Therefore I needed to be in bands. That is what I do and that’s who I am.

Tell me about the writing and recording process for the album. Where did you record it? How long was the process? What was it like in the studio?

Titan Fox: As I said above, the songs were created in a short amount of time. We wanted to work with Charles Greywolf (of Powerwolf) as we had only heard the best about him and as he is a specialist in traditional metal. We contacted him and he liked our material very much, so we made a deal and had the best time in the studio! He is amazing to work with and he really pushed us to great performances.

I’ve noticed that there’s a massive storyline here to our Hammer King. Tell us a little bit about this mighty warrior. He almost reminds me of a warrior king, like Beowulf or Conan.

Titan Fox: Yes, the Hammer King is a legend! He is mighty, brutal and strong. He is the King with the sword and the King! His legend needs to be told. I don’t know Him personally as he does all His conversation with us through the use of a messenger called the Chancellor Of Glory, but from what I have heard; he has not met Beowolf but is on good terms with Conan. The storyline will continue, of that I am sure. He has many tales yet to tell.

What do you do when you’re not playing music? What kinds of hobbies do your pursue?

Titan Fox: Aside from music I don’t do a lot. I go bike riding and sometimes ski. I also enjoy movies like most people, but my life belongs to the King now and I am dedicated to music.

What’s something that no one would guess about you?

Will you be touring live for this album? If so, will you be coming the US? There are still plenty of brave men and women ready to hold their hammers high for the Hammer King!

Titan Fox: We want to play as many shows as possible. We want to celebrate the King everywhere and we would love to come to the US! Show us your hammers and we’ll show you ours!

Thanks so fucking much for this album. I’ve been playing it to death, and the songs of course have been reverberating in my head for weeks. You may have literally created one of the catchiest power metal records of all time with this one. I definitely hope to hear more from you in the future. (Eric May)

Titan Fox: Thank you very much for your support, your dedication and your euphoria! We will be around for a long time. it has taken the King thirty-five years to get the band and the album together, so this is meant for the long run! God bless the King, may the King bless you. Do-you-do-you-Saint-Tropez!

This site uses Akismet to reduce spam. Learn how your comment data is processed.